Universal's Island of Adventure Orlando is where the world's most cutting edge rides and attractions challenge all your senses. From heart-pounding coasters to drenching water rides to pint-sized adventures, Universal's Islands of Adventure Theme Park is the spot for serious thrill seekers of all ages.

Universal's Islands of Adventure promises plenty of thrills with rides like The Wizarding World of Harry Potter™ - Hogsmeade, Jurassic Park River Adventure, Skull Island: Reign of Kong and much more. Also appealing towards younger kids with areas like Seuss Landing which is a 10 acre are based on the beloved Seuss books.

Step right into the greatest myths, legends, cartoons, comic books and children's tales of all time and embark on your own heroic journey at Universal's Island of Adventure Theme Park.

From magical spells to magical creatures, from dark villains to daring heroes, it's all here at The Wizarding World of Harry Porter. Explore the mysteries of Hogwarts castle. Visit the shops of Hogsmeade and sample fare from the wizarding world's best known establishments. Plus experience pulse-pounding rides and attractions that transport you into a world of magical thrills and excitement.

Harry Potter and the Forbidden Journey - Make your way through the classrooms and corridors of Hogwarts. Then soar above the castle grounds on a ground breaking new ride that lets you join Harry Potter and his friends on an unforgettably thrilling adventure.
Must be at least 48".

Flight of the Hippogriff - Learn the proper way to approach a Hippogriff before you take off on a family-friendly coaster that spirals and dives around the pumpkin patch, and swoops past Hagrid's hut.
Must be at least 36".

The Amazing Adventures of Spider-Man
Swing into action and get ready to battle villains when you put on your 3-D glasses for an eye-popping, pulse-pounding, first-of-its-kind 3-D thrill ride with smashing effects. As you venture through the streets and swinging high above the city, you'll see, hear and actually feel the action of Spider-Man's most amazing adventures ever and prepare to dive into a 400-foot free fall at the end.
Must be at least 40"; 40" to 48" must be accompanied by an adult. 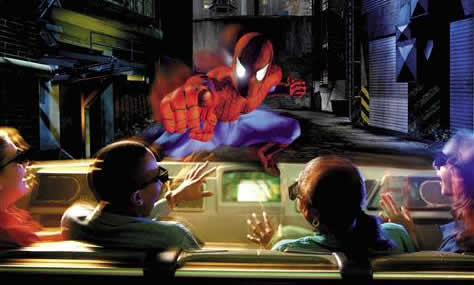 The Incredible Hulk Coaster
Experience a raging roller coaster rampage. As you transform into the Incredible Hulk, you'll feel the surge of energy as you get launched from zero to 40mph in two seconds, upward 150 feet (46 meters) and reaches top speeds of 67 mph (108 km/h).

The ride has a total of seven inversions and two subterranean trenches.
Must be at least 54".

Pteranodon Flyers ® Swoop and soar through the air and get a Pteranodon's-eye view of Camp Jurassic.

Jurassic Park River Adventure ®
See dinosaurs in their natural habitats on this thrilling river raft journey. But wait, the fences are down, the Raptors have broken loose, and the only escape from the terrifying jaws of a hungry T-rex is an 85ft plunge in total darkness.

Dragon Challenge - Face Dueling Dragons, the world's first inverted dueling roller coasters. You'll need the courage of a Triwizard Tournament champion as you climb aboard one of two ferocious dragons that twist, loop and nearly collide in a high-speed, intertwining roller coaster chase across the sky.
Must be at least 54".

Under 48" must be accompanied by an adult.

Poseidon's Fury ®
Tour the dig site of the remains of the ancient temple of Poseidon far beneath the sea. But be warned: if you go too far, you may never come out! Once inside, you'll find yourself trapped as huge fireballs, lasers and explosions of water erupt all around you in a colossal battle between ancient gods.

The Eighth Voyage of Sindbad ® Death-defying feats and heart-stopping stunts abound as Sindbad attempts to rescue a beautiful princess in his most daring adventure ever!

The Mystic Fountain Make a wish at this magical fountain in Sindbad's Village.

Dudley Do-Right's Ripsaw Falls ® Hop in a log and try not to get wet for this wild and wet flume ride. Remember to hold on tight for the "dynamite" ending! Must be at least 44"; 44" to 48" must be accompanied by an adult.

Me Ship, The Olive® Kids will have fun exploring Popeye's ship with three levels of interactive fun.

Popeye & Bluto's Bilge-Rat Barges ®
Brave white-water rapids and get soaked in this churning, splashing raft ride that will make you wish you'd brought your can of spinach and a towel.

Caro-Seuss-el Merrily go 'round and 'round with a menagerie of colorful Seussian creatures. Under 48" must be accompanied by an adult.

The Cat in the Hat

Ride your moving couch through the pages of Dr. Seuss' popular children's book and take a spin through the mischievous world of The Cat in the Hat. An American favorite and fun for the whole family! Under 48" must be accompanied by an adult.

If I Ran the Zoo You'll find the strangest creatures in this interactive play area for kids of all ages.

One Fish, Two Fish, Red Fish, Blue Fish - Steer your fish through an obstacle course of
fountains that squirt in time to a musical rhyme. Under 48" must be accompanied by an adult.

Note: Children under 48" (1.22 meters) must be accompanied by an adult companion at all times and on all attractions.

Distance from Universal's Islands of Adventure to

Harry Potter and the Forbidden Journey

Flight of the Hippogriff

The Amazing Adventures of Spider-Man®